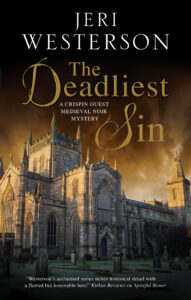 The nuns of St. Frideswide are dying in the manner of the Seven Deadly Sins, and Crispin is called in to investigate. But with the throne of England in an uproar, he soon finds himself fighting for his very existence as he must choose whether to do battle for King Richard or with his enemies, in this last tale of London’s Tracker.

A convent is plagued by a series of deaths that seem to mirror the Seven Deadly Sins. Crispin Guest, the Tracker of London, is called in to investigate and runs afoul of whoever is perpetrating these horrific murders. He and his apprentice Jack Tucker—with a little help from Crispin’s bastard son–must use all their skills to stop more murders from befalling the nuns of St. Frideswide. But tangled with these murders is the battle for the throne of England itself. King Richard has angered his nobles and treason is in the air once more. With Lancaster dead and his son Henry Bolingbroke exiled from England but amassing an army, Crispin finds himself alone at a crossroads again. Should he defend King Richard as he has sworn to do, or throw in his lot with conspirators—casting him again in the role of traitor? This is the exciting conclusion to the Crispin Guest story.

“Colorful, engaging characters, a richly textured dip into medieval life, and nail-biting suspense: it’s no surprise that this series has been nominated for thirteen national awards over the years.” — The Historical Novel Society Review